ASHDOD, ISRAEL, January 12, 2020 /24-7PressRelease/ — Assuta Ashdod’s emergency department earned accolades in a survey conducted by the Israeli Ministry of Health. With an overall score of 80%, Assuta Ashdod, Israel’s newest public hospital, received the highest ranking for patient satisfaction as compared to all mid to large-sized hospitals in Israel. The score reflects patients’ experience at the hospital according to various parameters that were tested in the summer of 2019.

The survey contained about 40 questions that examined, among other things, overall patient satisfaction, waiting times, ratio between patients and caregivers, access to pertinent information, and the willingness to recommend the ER to others. According to the Ministry of Health, the survey was designed so that about 20% of participants were Arabic-speaking and 6% Russian-speaking. 53% of respondents were male with a median age of 49.

“These results reflect the hard work, dedication and excellent medical care given to patients here at Assuta Ashdod 24/7, 365 days a year,” says Dr. Erez Barenboim, Director of Assuta Ashdod. “I want to thank our patients for putting their trust in us and for choosing Assuta Ashdod during difficult and challenging times. I promise we will continue to justify this trust while providing top-of-the-line medicine, superior patient care and advanced technologies.”

Located just 16 miles from the Gaza Strip, Samson Assuta Ashdod Hospital is Israel’s only bomb-shelter design hospital protecting patients and staff from missile attacks and chemical warfare. Assuta Ashdod has already proven lifesaving, by providing wounded citizens and soldiers with immediate access to emergency and urgent care treatment and equipment. The university hospital serves more than half a million residents of the Ashdod region, previously without a local hospital. Affiliated with Ben-Gurion University Medical School, Assuta Ashdod is helping to train Israel’s next generation of doctors. 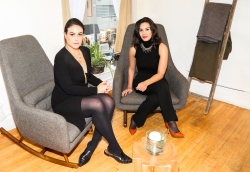 Consumers Sit Down with Gord Neudorf and his Professional Team from MNP Ltd.